The resurgence of Italian football

The transfer window is a fascinating time of year. In what we might now come to know as ‘silly season’, clubs around the world find themselves browsing the market in an attempt to appease the fans who sit and home anticipating a new superstar to inspire their team’s campaign. In a world where the Premier League has lost its sense of market value, and clubs in places such as China have purely lost common sense, the movement in the transfer market is an integral part to the development of football.

Some care more for the transfer window than others, but this summer’s window could be one of the most significant for the Serie A in recent years. Italy has historically been the home to some of Europe’s most successful sides, enjoying great success particularly throughout the 1980’s and 90’s. They have claimed some of the most tactically astute coaches, and the intelligent players to match. The style in Italy has often been compared to a game of chess: a game focused on its tactical awareness and where every decision matters. As the great Sir Alex Ferguson once quipped “Football is more and more like a game of chess, and in chess if you lose concentration for a second you're dead.”

However, in recent years Italy has struggled to reach its once great heights. The heroes of the 2006 World Cup win have faded, with the following generation falling slightly below their high standards. The domestic league, Serie A, has suffered as clubs failed to secure financial stability after two decades of high transfer activity. You can argue that expenditure was justified however, as Italian clubs reached nine out of 10 European finals between 1989 and 1998. Yet, in the last decade, only five of the 40 semi-final slots available have been taken up by Italian teams, with only two titles; statistically, this has been the worst of the six decades for Italian clubs since the European Cup began in 1955. There has been a sharp decline, and one that they are looking to rectify sooner rather than later.

Juventus, Italy’s most successful team, have completely dominated domestic honours in that time, with six titles on the trot. They have come close to the Champions League trophy on two occasions in the last three years, unashamedly pipped to the post by none other than Real Madrid and Barcelona. Juventus were unsurprisingly underdogs in these encounters but their Champions League campaigns were great for the neutral and heartening for Italian clubs, so, is Italian football back on the climb?

Italy can claim three of Europe’s top five leagues title winning coaches in 2016/17, (four if we extend that to Russia, who are ranked sixth domestically by UEFA) and the impact of the Italian tactical nous is unparalleled. Closer to home , we can see that the mastermind of Antonio Conte has been influential in how many teams have set up this season, with a number of teams around the country replicating his 3-4-3 structure. It is also hard to forget that one of the biggest shock’s in sporting history was led by an Italian, as Claudio Ranieri took Leicester City to their first ever Premier League title. Italy are undoubtedly producing great coaches, but can they keep them in the Serie A?

Many football fans argue that a ‘one horse race’ can dilute the quality of a league. Italy has been unfairly stereotyped as ‘boring’ as Juve have run away six consecutive league titles. But does competitiveness produce better quality? Judging by the performance of the ‘ultra-competitive’ Premier League clubs in Europe, apparently not. Despite the wider perception of the Serie A, the gap is narrowing. There were a total of 1,123 goals last season which was more than the Premier League, La Liga and the Bundesliga, all of which have been ranked as superior leagues in the UEFA coefficient. Roma and Napoli remained close in the title race until the penultimate day of the Serie A last season, with Roma recording the most points in domestic history without winning the title, and Napoli breaking the all-time record for most goals scored in Serie A history, with 94 goals. It can’t be that boring!?

Another big plus for Italian football is the return to prominence of AC Milan. The bright Vincenzo Montella was finally able steer his squad away from a period of mediocrity, securing a Europa League place and the Supercoppa trophy in the process. Montella has settled in a job which has largely been seen as a poisoned chalice in recent years. Even club legends such as Clarence Seedorf and Filipo Inzaghi weren’t safe from the wielding axe of Silvio Berlusconi. Milan have looked to have found their man in Montella, a coach who has produced consistent results in both the Serie A and in Europe. Milan return to the Europe this season in Thursday night Europa League action, and the fact that Montella led his Fiorentina to the semi-finals of the competition, with half the budget, will give Milan fans reason to be optimistic. The last few years have seen AC Milan branded a ‘sleeping giant’ across the footballing world, however this summer has seen an air of positivity return to the San Siro.

Unless you have been living under a rock, you would have seen that Milan have been splashing out on new signings this summer, thanks to recent investment from new mega-rich Chinese owners. The Rossenieri have clinched the services of defenders Ricardo Rodriguez, Matteo Mussachio, midfielders Lucas Biglia, Frank Kessie and Hakan Calhanoglu as well as the purchase of Portuguese forwards Andre Silva. The largely inexperienced squad was in dire need of shake up prior to the window opening, and the signings will rejuvenate Milan, with the future well in mind. The club have also managed to convince promising goalkeeper Gianluigi Donnarumma to extend his current contract, after the towering teenager hinted at exiting earlier this summer.

However, despite a busy month of young and exciting talent arriving at the club, one signing caught the curiosity of football fans around the world. The capture of Italian international Leonardo Bonucci is without doubt one of the best yet most surprising signings of the summer as the club managed to lure him from rivals Juventus for a bargain £35m. Milan instantly rewarded the Italian international with the captaincy, and his signing is a real statement of intent from the Milan board. 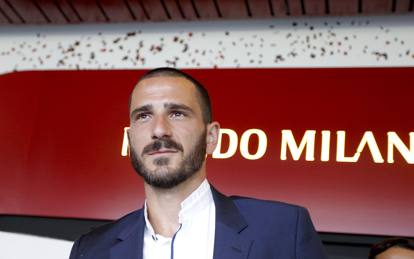 Bonucci’s transfer took Milan’s expenditure over the £150m mark, more than the club have spent in the last five seasons combined, and although the squad will need time to gel, Milan fans will be expecting their team to mount a threat to Juve this season, at the very least. Bonucci is regarded by many as the best centre back in the world, and his transfer fee offers phenomenal value in today’s market. Bonucci is relishing the challenge of leading Milan back to the top; he said ‘some supporters asked me if I'll be able to shift the balance... I will work to make it, fighting with more hunger than ever.’

Italy needs a strong Milan. They need a strong Juve too, and Bonucci’s departure will make interesting viewing for next season’s title race. Juve’s recent European run ins have helped Italy claim back a fourth Champions League spot, highlighting that there may well be a tide turning for Italian football. This is coupled by the national team returning back to their strengths after a superb Euro 2016 campaign. The squad, which is full of young talent and a plethora of middle-age and experienced veterans, has near perfect balance in all areas. Once qualification is sealed, winning the World Cup in Russia does not seem a far-fetched possibility.

It is undeniable that the resurgence of the Serie A is aligned with foreign investment, just like many other leagues around the world. However, the financial support together with fresh new ideas of the authorities is the catalyst the league needed to return to its reputable standings. Juventus will welcome the chase, with Roma and Napoli hot on the heels and both Milan clubs hoping to be up there too. It is unfair to brand the league uncompetitive or boring, with smaller clubs like Atlanta and Sassuolo showing they compete at the top by clinching European spots in the last two years to prove that. While the Premier League is in danger of becoming a vacuum for innovation, where the most obvious solution to an issue on the field is to spend money off it, Italy has been rewarded a fresh chance to build on its previous years. Serie A clubs have been lauded for providing more opportunities for younger talents than much of the other top European leagues. If Italy’s top clubs can combine their impressive youth development with shrewd transfer business, we might witness some of Europe’s most coveted prizes return to the country sooner rather than later.